Well actually not so much a new beginning, but new enough for this blog. 😉

With my Brits “officially” finished — we all know armies are never finished, but at least I hit a target… — I’ve since started on my Germans. I’ve been busy over the last three weeks, but I’ve more or less put together the minimum minis needed:

A Leutnant 2 squads of 5 Landsers each, with a MG-34 in each squad. Works out to be 190 points, still short of my target of 250 points before starting to paint. That’ll give me two base squads of 8 Landsers each.

I was using the German Pioneer box for the minis and would be adding minis from the Late War German Infantry box later, to represent a rag-tag bunch of 2nd-line infantry. Overall I’m ok with the Pioneer box, a bit unhappy because of a few niggling points. Doesn’t have enough rifles to fully equip all the Landsers on one sprue — I think Warlord was expected players to put an SMG on the NCO so didn’t include a “spare”.

Also, the MGs gave particular trouble, because Warlord didn’t appear to think though on the ammo problem. They gave a ammo box with an arm attached, and then a belt of ammo meant to be slung over a neck.. that’s it. No 50 rd mag (where the early war MG 34 would have them, and the Pioneers are using early war uniforms), no spare belt or box without arms.. so end up, you either model the MG without ammo or the loader with the gunner.

Obviously I didn’t want that, so I had to do a bit of conversion: 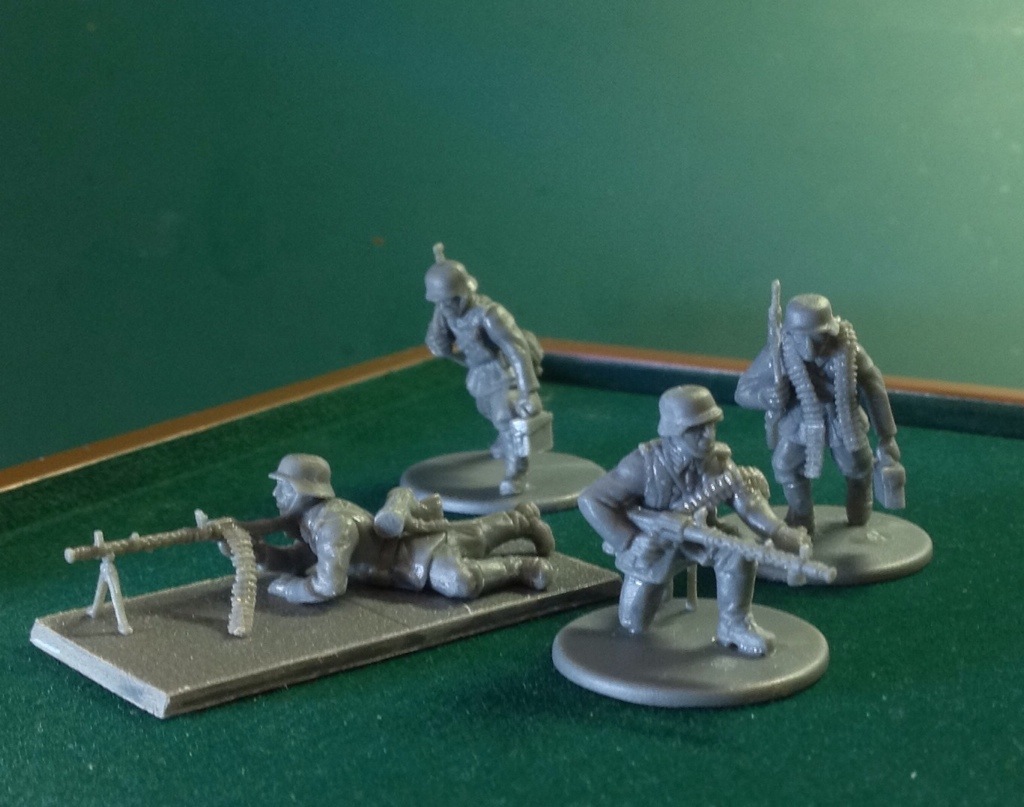 Both belts came from one of the neck-slung ammo belt. Needed to trim some parts, of course. And not enough arms to do cool poses either, I wanted to give the kneeling gunner a more action pose, but the gun breech (and the attached ammo belt) and the lack of arms that could grip the barrel meant I have to use the arm holding the bipod.. I suppose I could have used the NCO pointing arm, but that would have required this guy to be a Rambo and hold the MG with one arm.

Nor was there a base for the prone figure — take note, you’ll need to source your own. The box didn’t even bother including a 25mm circular, since it’ll just overhang with arms and legs all over. So you’re short bases already with the box, doesn’t help that the box have additional metal pioneers that are prone too. I went with the GW modular movement tray because those are nicely marked, I used 50mm x 25mm in this case. Also don’t quite like the way the neck is a flush cut with the collar, this meant heads swivel on a single plane and is not as posable to look up and down.

It’s not terrible by any means, but a little bit more and it would have been a great product. As it is, it’s just a bit shy. A few nice touches — extra helmet, useful for my truck drivers, enough SMGs. Overall I’d still recommend at least getting the Late War German Weapon sprue just to ensure you have enough guns, then maybe work with the poses a bit. Fairly nice to put together.

So still have 6 more minis to build, and those would mostly come from the Late War Infantry set. All will be infantrymen. Let’s see how those turn out.