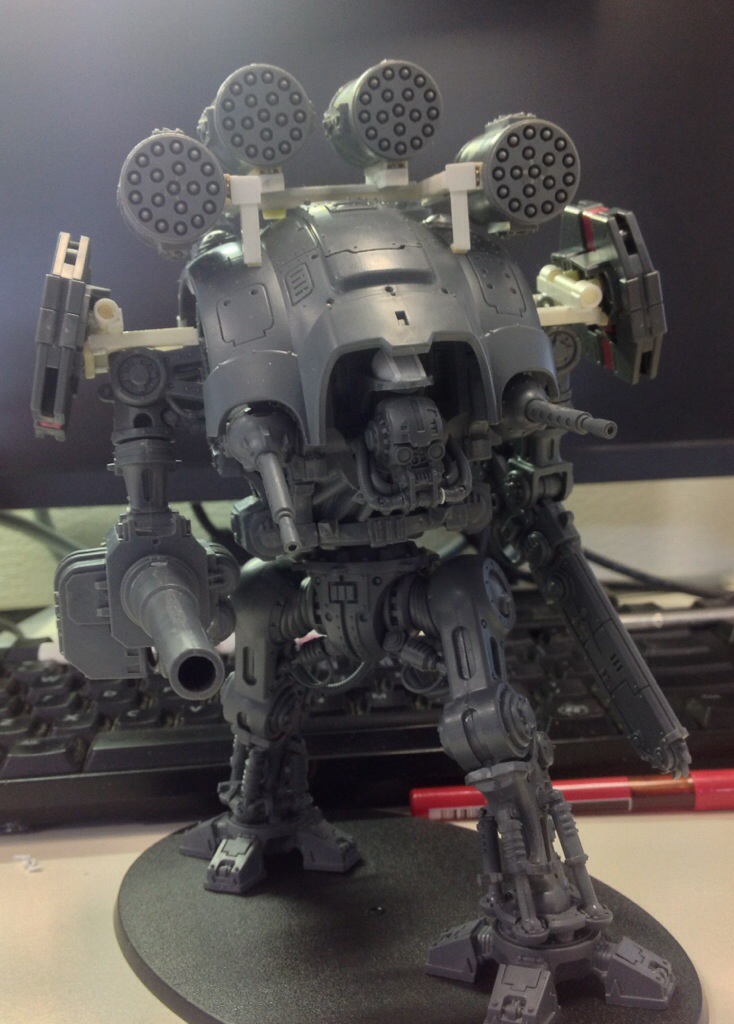 So yeah. 3 months passed since “I’m not dead yet”. Sigh. Combination of work, school and life just decided to beat me senseless.

Not that I didn’t get hobby stuff done, of course. I picked up an Imperial Knight when it first came out.. well actually I picked up a damaged Imperial Knight at a discount and continued to further damage.. eh. Convert it. Since I took some pics along the way, you guys get to see what insanity goes through my head.

Such as the somewhat over-firepowered Knight on the left…

Warning: Pic heavy after the jump.

So as I was saying, the Imperial Knight I picked up was damaged. Apparently, GW was a bit overconfident in its ability to push plastic into sprues, and one of the weak points in this kit is that there are parts so big, sometimes the casting process doesn’t quite measure up. I didn’t have an intention to actually own a Knight, since I didn’t like the trend of GW to produce big, difficult to transport minis, but a local guy here did some inspection of the LGS stock and posted warnings about the kit having issues, including “heavy damage” on some of the brand new kit. So I went down to the LGS to take a look see, and the LGS was offering the damaged kits with a discount. The extent of the damage was, well… to the right.

Yeah. That small hole. And there were some other damage I found later, but materially, since I had a mental concept of a battered Knight, GW was actually helping me along. And the discount helped…

So that’s how I ended up the owner of a pre-battered Imperial Knight. Strange how things go, ain’t it?

So, what was I going to do with it? First, I disliked the big shoulder pads, so I never assembled those. And I thought the shield on the right side was a waste of space, so I ditched that, and moved the heavy stubber from the battlecannon up, so that the Knight has both stubbers on the shoulders. Looks nicer that way IMO. Then I started to get creative… 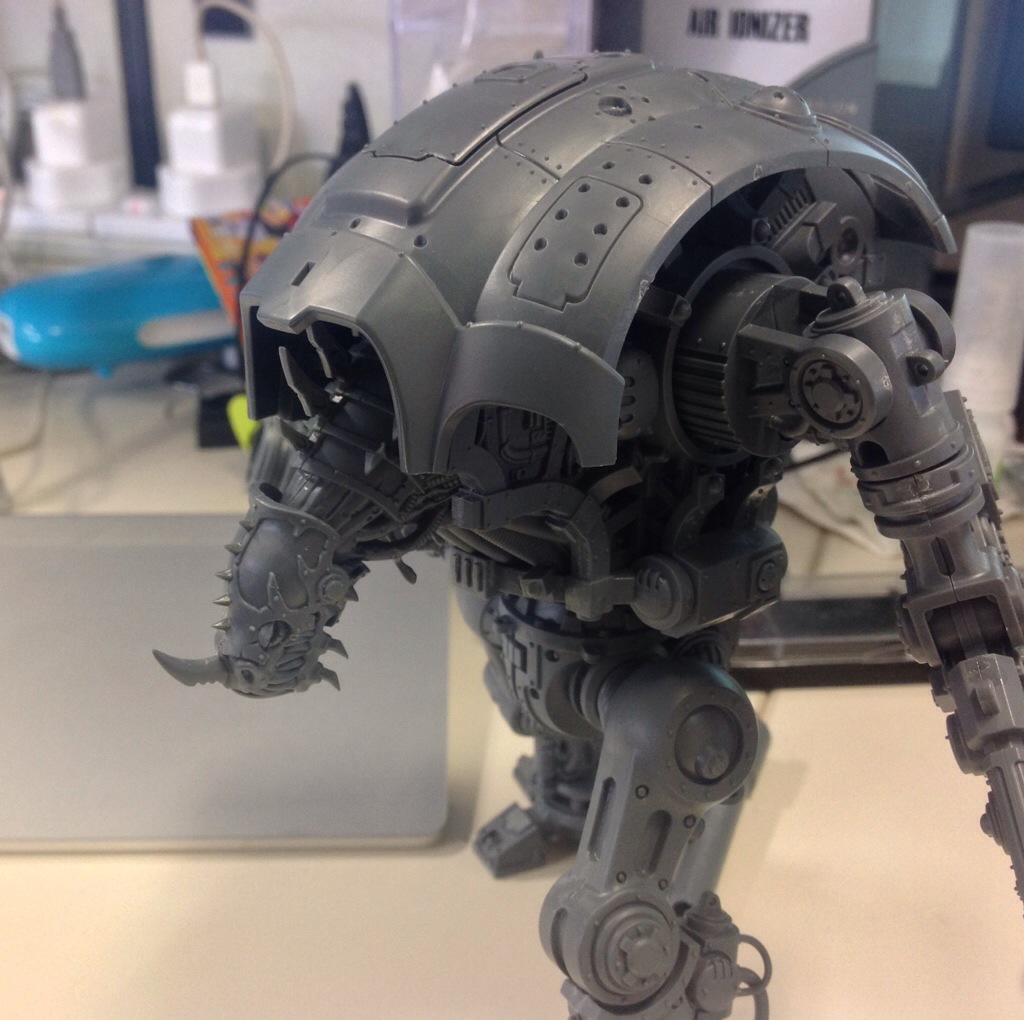 Well not that creative, a simple head swap.. you can see where I left off the shoulder support, and I supposed I got creative earlier than I thought since I obviously haven’t mount the heavy stubbers yet. Just a quick head swap with a Chaos Daemon Engine, could work really. Nothing really too difficult, since the parts are mostly GW.

And those arms did look kind of naked with the shoulder actuators so exposed. I ended up sourcing around Gundam parts to find useful bits, and ended up with the following: Didn’t look too bad, but eventually I got rid of those baffles. Nothing about aesthetics, it’s just that I expect Forgeworld to release variant arms in the future, and those made it hard for my Knight to accept the arms. So they are scrapped, but I now have another idea…

Anyhow, the madness progress further, and I gave the undercarapace some details. Because I can. 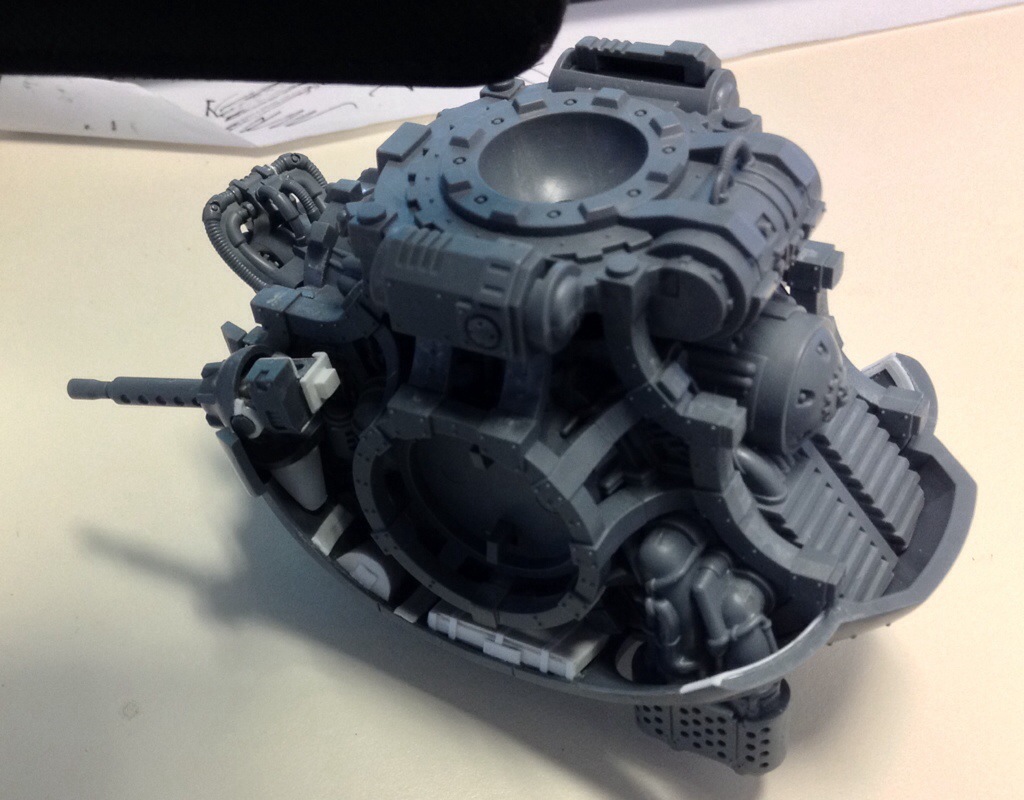 You can see the adaption I needed to do on the battlecannon heavy stubber for it to fit, and I learnt quite a bit from doing the detailing. You can see it when the Knight is upright, but it’s one of those things that you have to know what to look for.

That wasn’t quite where it got crazy though. It got a bit out of hand when I thought it looked a bit, well.. bare-backed. Then it got rapidly out of hand: 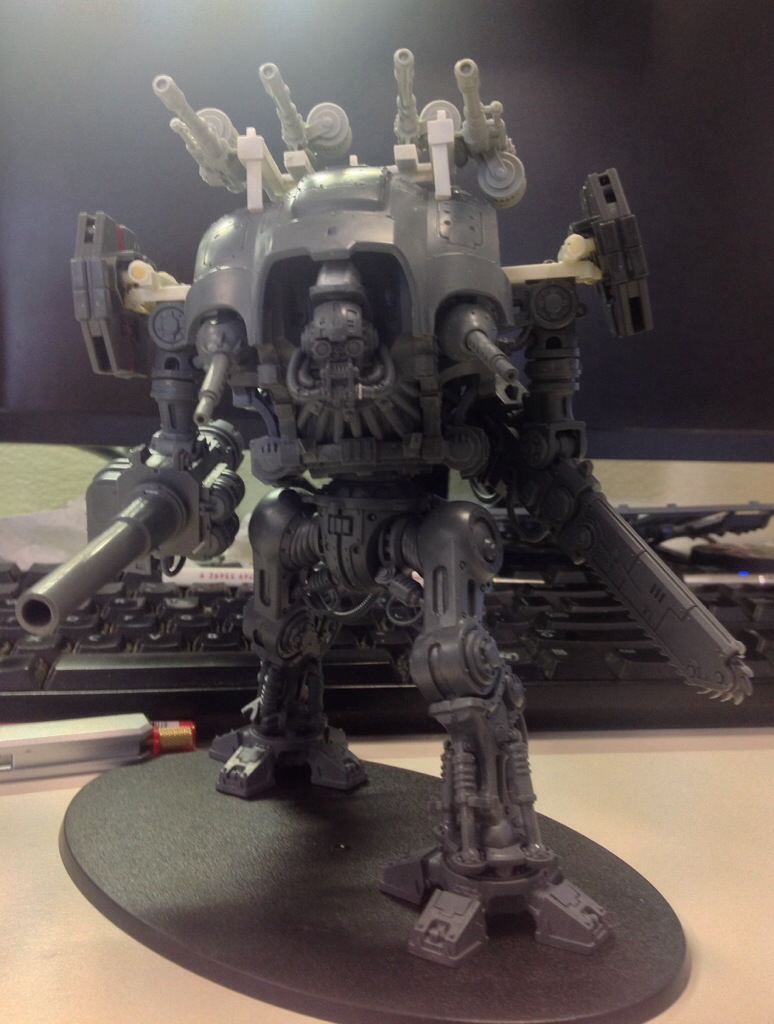 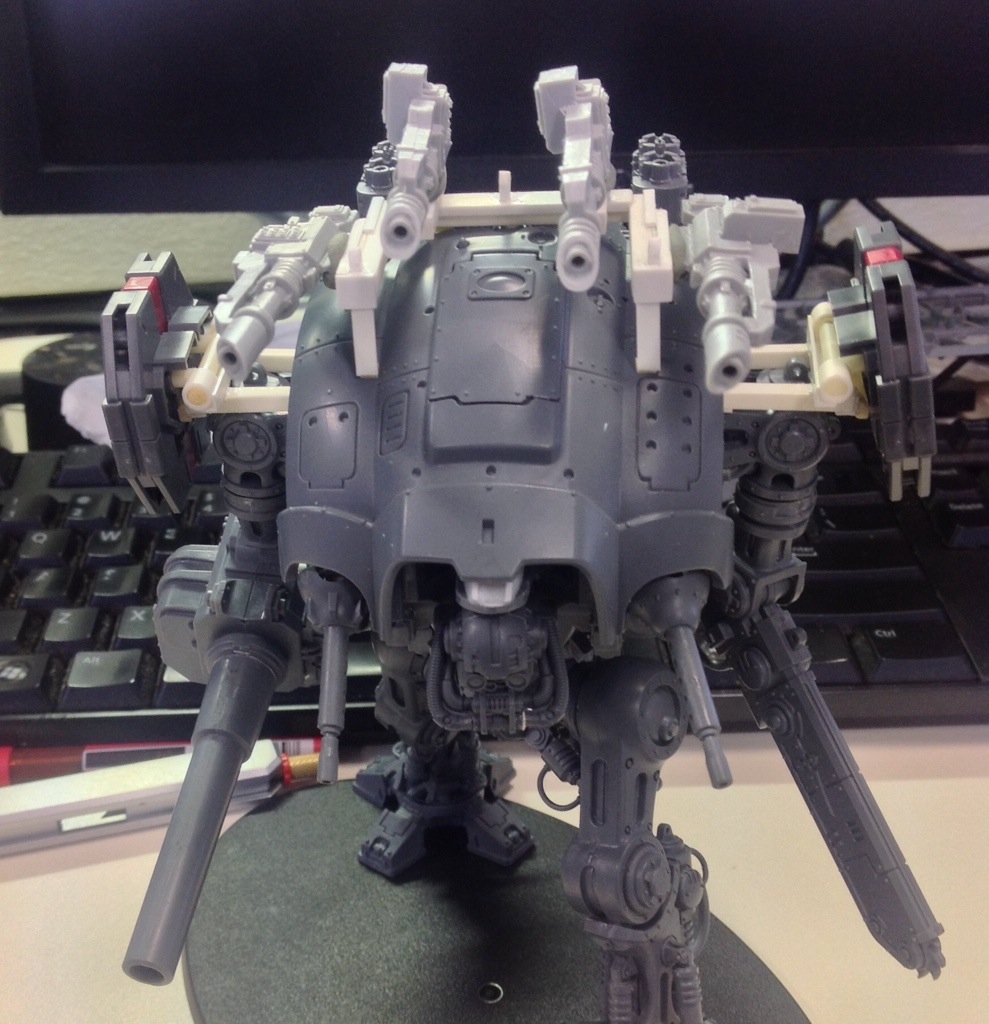 I even tried a little scanner: 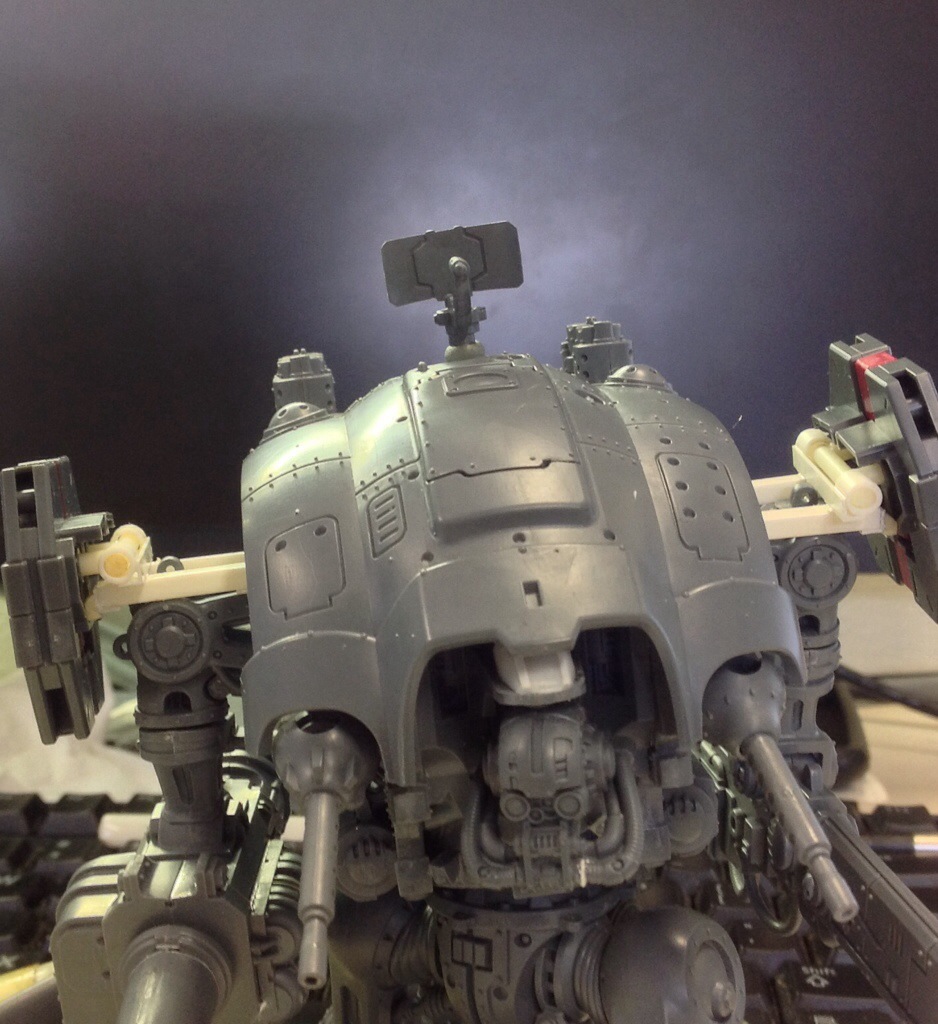 And it finally culminated with this: 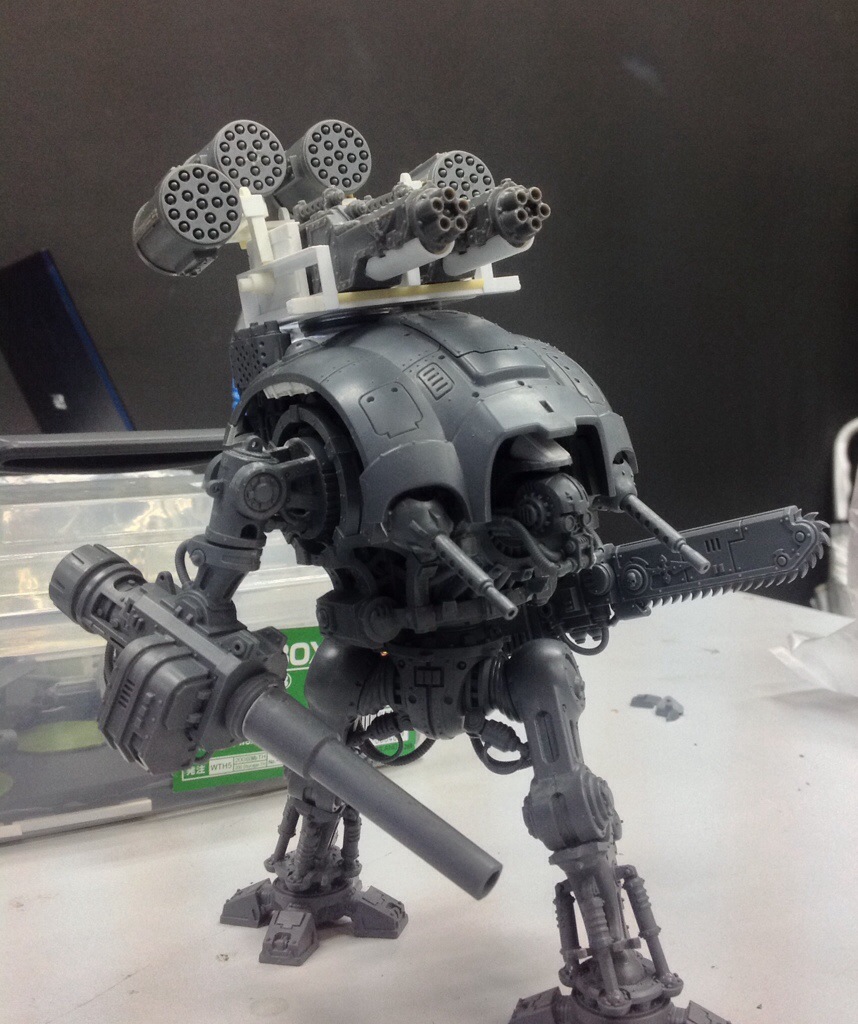 Which really, really was overboard. That didn’t happen in the end — I think. Basically my Knight now can mount serious amounts of firepower. Heh. Hehehehe.

The Knight Project has sort of fallen by the way side as I was concentrating on another build, but I do intend to revisit it, as I still have to get that Storm Eagle missile battery working. My other project is about settled, so I can actually come back to revisit shortly. And I still have that idea for the arm baffles… hehehehe.

One Response to Imperial Knight