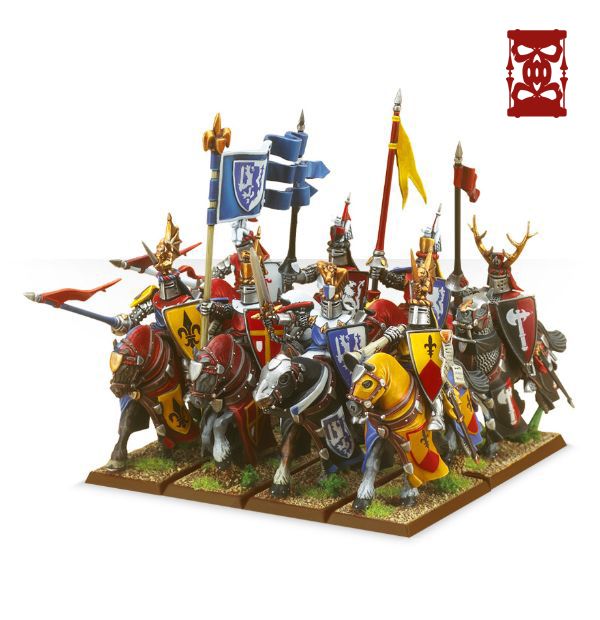 Good old Bretonnian Knights of the Realms. Looks good, but hmm, painting is a bit of a pain.

So, in case you have been under a rock, Games Workshop had killed off Bretonnians in the new Age of Sigmar. Bretonnians had always been a troublesome army — they look great when painted up, but their obvious analogy to medieval European armies meant they can… well, easily be reinforced via non-GW products. With Games Workshop retiring the Bretonnian range, this might be a good time to take a look at alternatives to WFB Bretonnians.

Well actually, that’s a lie. I’m just going to go over quite a few alternatives, to both the Bretonnians, and some of the ex-elite Empire units, notably Empire Knights and their foot knights.

Teutonic Knights. I suspect the sprues for Templar and Teutonic are the same, just felt the Teutonic had a bit more presence.

So first up, Bretonnian Knights. These are more along the lines of 12~13th Century knights, with their flowing barding and presence. GW just offered to put in another production run of these knights, and while I’d pass — I got a stack of them somewhere — I’d have gone for the Pegasus Knights in a heartbeat. Those are some of the nicer units to come out for WFB.

Still, coming back, about the best fit I can find for the Bretonnian Knights are the Fireforge Teutonic and Templar Knights.  I don’t have them personally, but looking at the various pics of sprue and assembled minis, they look about right, if a bit blander than the over-the-top heraldry that the Bretonnians carry around. A added benefit is that Fireforge also have period infantry, in both Teutonic and Templar versions, so your old Bretonnian Men-at-Arms are covered.

They also have mounted men-at-arms, so it really helps the Bretonnians out in terms of the more mundane stuff. They may not have the exact weapons mix, but at this point that might not be a big concern any more.

So Bretonnians are covered, how about the Empire? Empire took a more Germanic stance, usually a bit later — 15th Century staff, more of plate. For that, I tend to reach for Perry Miniatures. I like Perry Miniatures in general because their plastic tends to be more robust and the details better suited for miniature gaming. In this particular case though, it’s more that there are few companies that I know of that are doing plate armour in a reasonable way.

Perry does give you choices. You can take Agincourt, though I personally feel that’s halfway between Bretonnia and Empire, so suits neither… might be workable for State Troops. The more generic Foot Knights though, really hit the spot with their plate armour, that floppy feather in the helmet, and generally big, hulking weapons meant more to beat you senseless than to cut into you. The poseability also looks quite nice. For Empire elite infantry or just parts for heroes, I think this is quite a good match.

Empire Knights though, are a much harder proposition. Perry Miniatures do put out an armoured knight box, but… Well there are problems. See those two unarmoured horses on the left? Yeah, that. Turns out, the box gives you enough horses to build 12 knights, but has only enough armour for 9 horses… I think. The rest were supposed to be more lightly armoured. Not unrepresentive of the period, but well.. Empire knights. You want them to be nice and shiny, after all.

Perry also has some stuff that are good for Bretonnia, such as the Light Cavalry box, but one of the things missing is Empire pistolers… because the wankers that they came from are from another era. Sods they are. So for those, we bounce over to Warlord Games. 17 Century guns mixed with 15 Century plate armour.. the Empire really did try to go for it all.

Warlord is interesting because they had been gobbling up either whole companies (in the Bolt Action and some of the Ancients line), or distribution rights (for Wargames Factory). The latter is currently annoying because Wargames Factory does have some interesting kits, but they are largely unavailable until Warlord gets up to speed. Anyhow, for our purpose, that’s not really critical, because what we are looking for is in their Pike and Shot range.

The Harquebusiers are probably the best fit for Empire Pistolers because they aren’t armoured up, and are riding unbarded horses.. Speaking of which, I have a sneaking suspicion that these are smaller than your average WFB horse. IRL horses in this era tended to be smaller than the warhorses that WFB make them out to be, so there is a size disparity. In this case it works out well for us because it helps to set the unit apart from the heavy cavalry. One interesting problem is that Empire handgunners. Pike and Shot does have musket-armed troops, but they come with some pikemen, which Empire doesn’t use, so you aren’t maximizing the purchase. One interesting possibility is the Dragoons box, which is a bit more expensive, but does let you sort out handgunners and pistolers at the same time. Still, for large formations of handgunners, you might really end up having to get the pikemen.. I suppose those are really long spears.

And finally… if you really want to go a bit wacky, you can always do the Empire up as Feudal Japan. 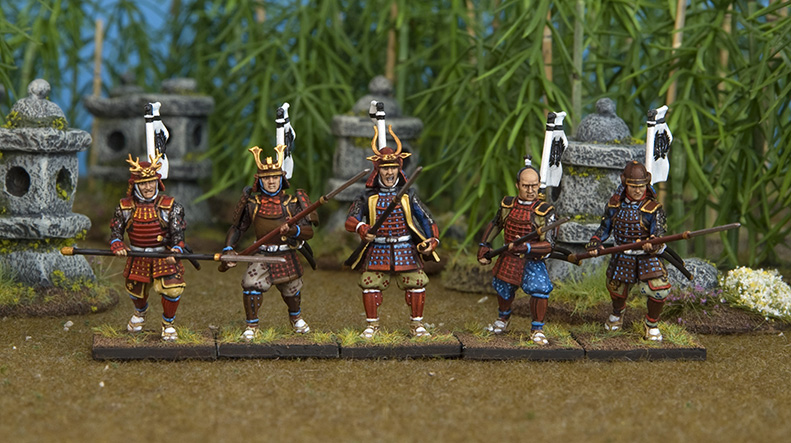 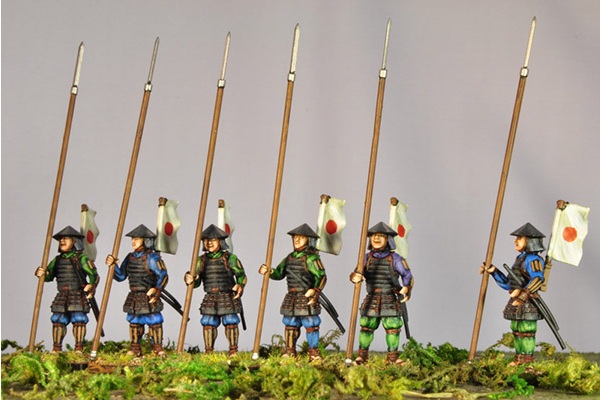 Well these are older Wargames Factory kits, that Warlord hasn’t gotten around to it, but you can have field infantry with swords, spears.. you can reserve the Samurais for the elite infantry, but pretty much everything works. I think there was supposed to be a box of Ashigaru with firearms, but in a pinch there’s always the crossbows.

But the one that I really cuss myself for missing is the mounted Samurai set. I mean, really, these are really nice looking minis: 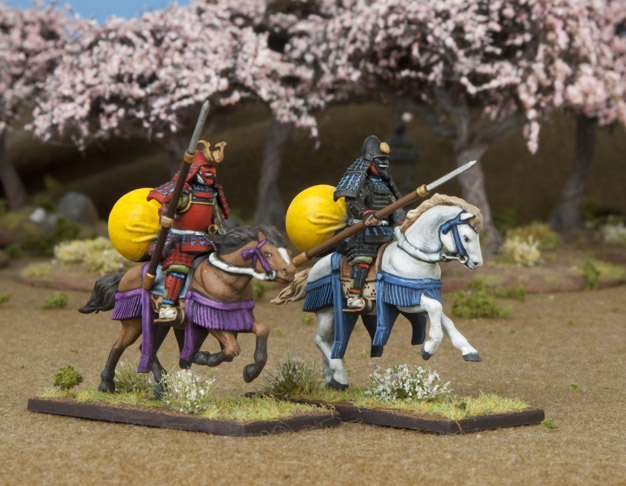 Can you imagine a full on charge by these?

At the moment though, Warlord hasn’t quite gotten around to getting a boxed set together. That’s why I’m kicking myself for not picking up one when Wargames Factory was still selling them.

Hmm. Gotta think about if I can use these to represent a Bretonnian army. 🙂