sg-lynx.net » Dark Angels » The Lack of Updates has ended! Well…

The Lack of Updates has ended! Well…

Mechwarrior Online is really sucking my life up. Not a good sign I presume… Still, like a friend would say, pew pew is fun. 🙂

o2 April will have a patch, to remove the sales and 2XP weekend effect, but the lack of patch information thus far is a bit worrisome. Hopefully, the missiles rework is done and the LRMs and SRMs can go back to being a wee bit more useful.

Also looking forward to seeing the April Creative Director’s update. Should be due today or tomorrow.

In other news, I’m participating in the Dwarven Forge Kickstarter.

I’ve had DwarvenForge stuff for quite a number of years, just never really used them. They’re heavy to transport, which is their main failing; otherwise, they are next to unbreakable. This new set, which is not really new since it replicates a lot of older stuff and is backward compatible (so claimed), uses a new material.. basically, rubber mallet stuff. Which just means those dungeon critters can now pick up the wall and throw it at you… xD

I don’t mind putting down money to support but it’s really hard to move these things. If the weight is similar, I’m going to seriously regret this.

In 40K, Tau is around the corner. I’m being teased by that silly Riptide. I’m not sold on the upper torso so I’m not getting it at launch. Figures there will be time enough to get it later, and I need to sort out my own bloody stack of unbuilt stuff anyway.

Already put down cash for the Codex and a new Broadside. Just one ’cause I have Broadsides already, just wanting to see how GW did the new one, and see if I can replicate/ share parts with my older models. 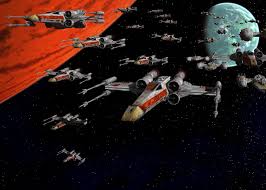 Also picked up Star Wars X-Wing Miniature Game. Pew Pew, just in time to see the second wave come up. Quite keen on the TIE Interceptors — those squints are pretty on par with the X-Wings, and are cheaper to boot. Abby also talked about a 5 Y-Wing 100 pt force.. 40 damage is a bit hard to achieve, and R2-D2 might be around to regenerate shields…. Need to get in some games.

And lastly I still need to make progress on my Dark Talon. Mount’s done, need to get the landing gear done, and need to work on those Hurricane Bolters. Sigh. Trying to do too many things.