BAM: In the Trench 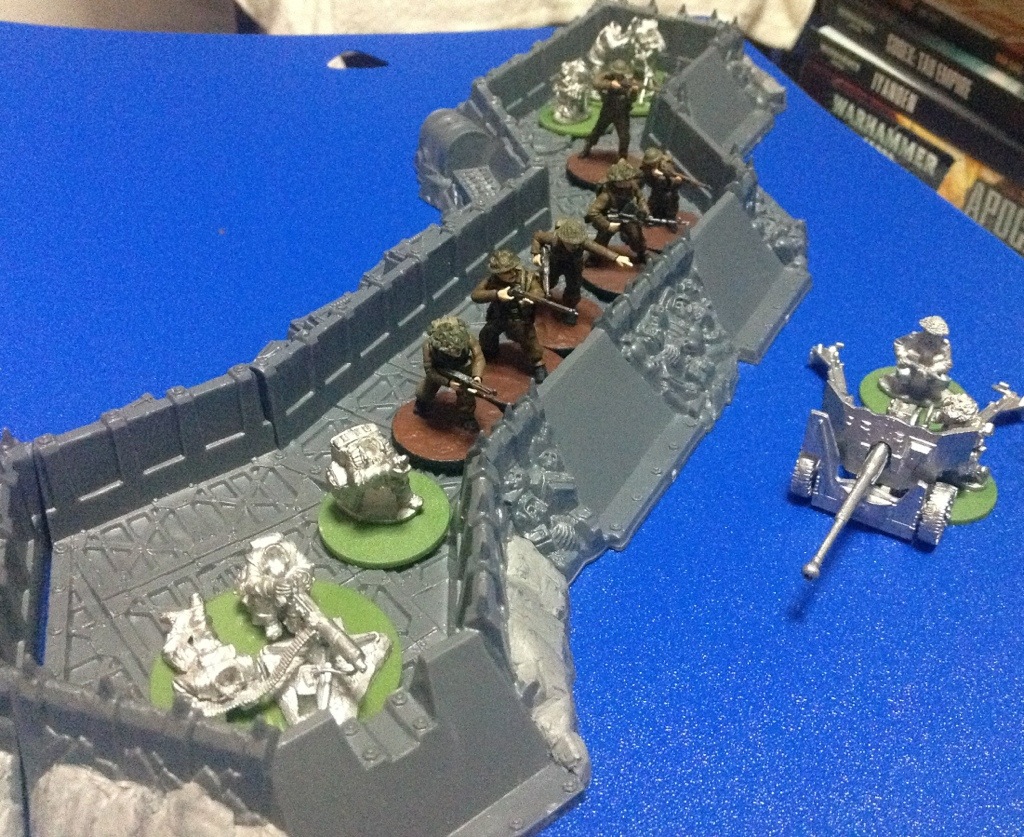 So, I had a slight fall this evening and as a result did an inspection on the minis I was carrying. Turns out a few base chips (I was using wood filler, so no surprise), one broken Bren barrel (which broke previously already), so it wasn’t too bad. But since the minis are out… 🙂

My first section in a GW Wall of Martyr trench section, with a fire pit. I’ve went with the Vickers MMG in the pit, and a 3″ mortar on the far end, and the 6 pdr gets to sit out this one. The MMG and Mortar are based on 40mm bases, two on the base and one additional crew on his own 25mm base. That’s mostly aesthetics and for ease of transport — Warlord mostly have them on 60mm bases and those are just a bit large for my taste. Besides, if I had gone with 60mm, I’d be constrained by base size for my mortars to go into fire pits. Won’t have been able to fit it in a trench section like this. 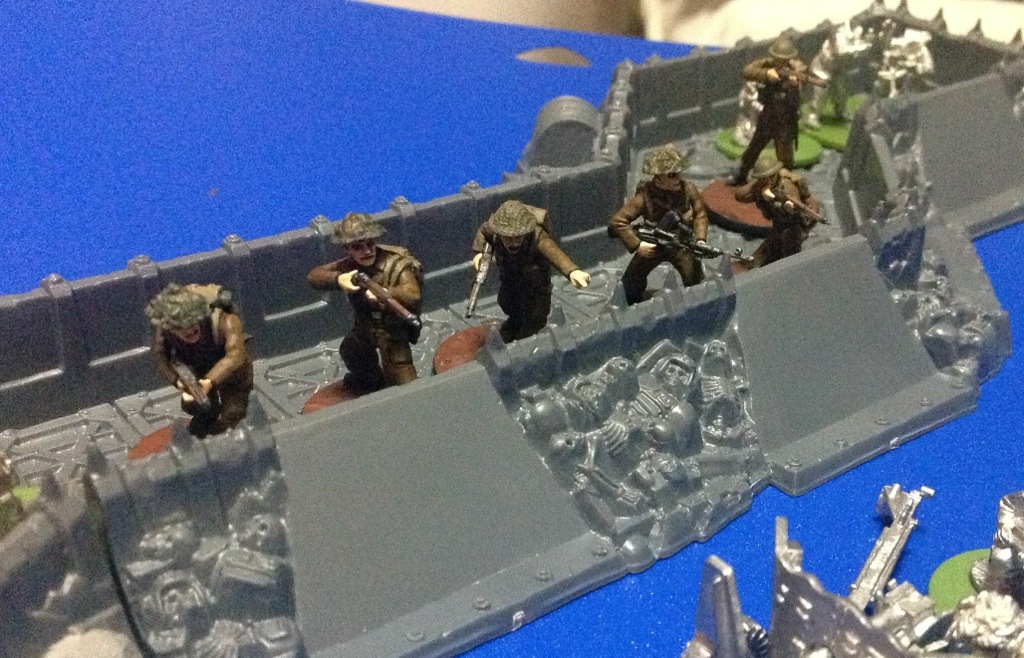 Close up of my painted section in the trench. I don’t quite like the setup as the spiked section are just a bit too high for “hip shooting” or kneeling troops to shoot.. and a lot of minis are posed with guns shooting from the hips. The non-spiked sections are low enough, but overall it just strikes me as a bit off. Then again, I’m using flat 25mm bases for my BAM minis, GW stuff with their raised bases should be ok. 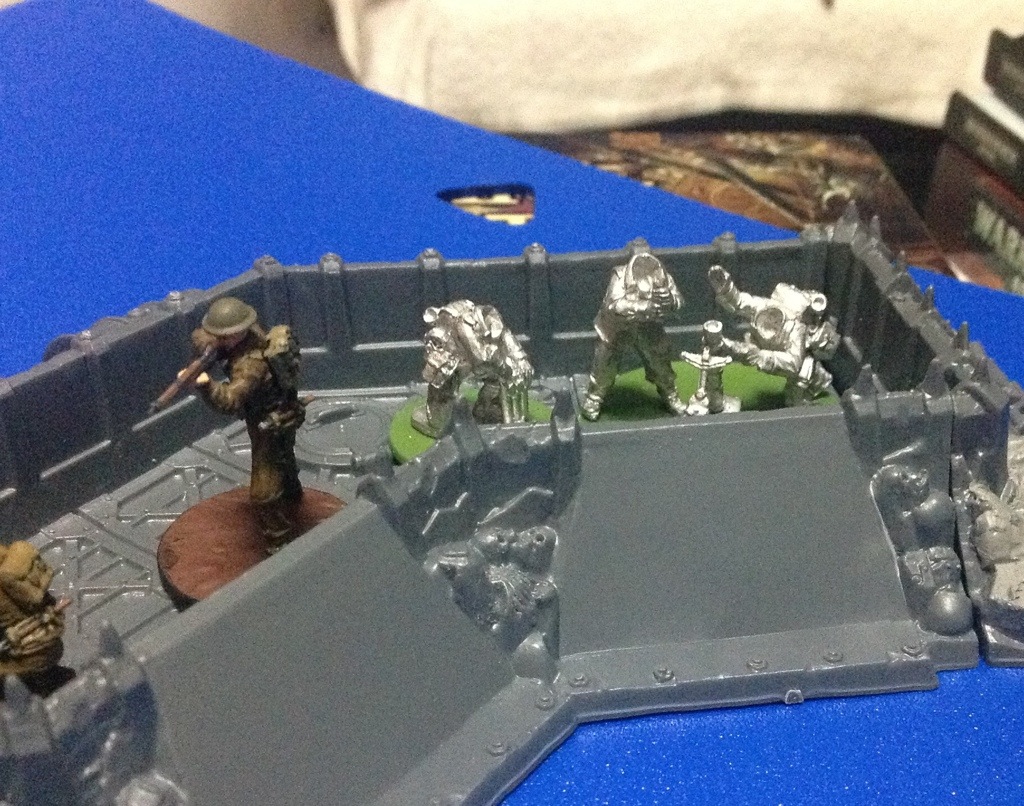 A closer look at the mortar. The crew doesn’t have heads at the moment because BAM stuff has a head-swap system, and I’m trying to find time to see if the plastic heads are better for these folks. The 3″ Mortar itself is a bit fiddly to work with — the bipod propping the mortar up has a small contact point with the mortar tube itself, so you do need to glue the two bipod legs down on the base to properly support. But doing that before doing the base makes it a bit fiddly to work with.

I’ve also cut the mortar crew I wanted on this base off their usual lead/ pewter bases. This is mostly so that they are level with the mortar itself. The third crew on his own base is still on his pewter base. Overall, I’m not too happy with this set of minis, the weapon is too fiddly to put together, and the third crew seemed to have some miscast. If I didn’t like the mission profile of the mortar I’d probably have given this a pass. 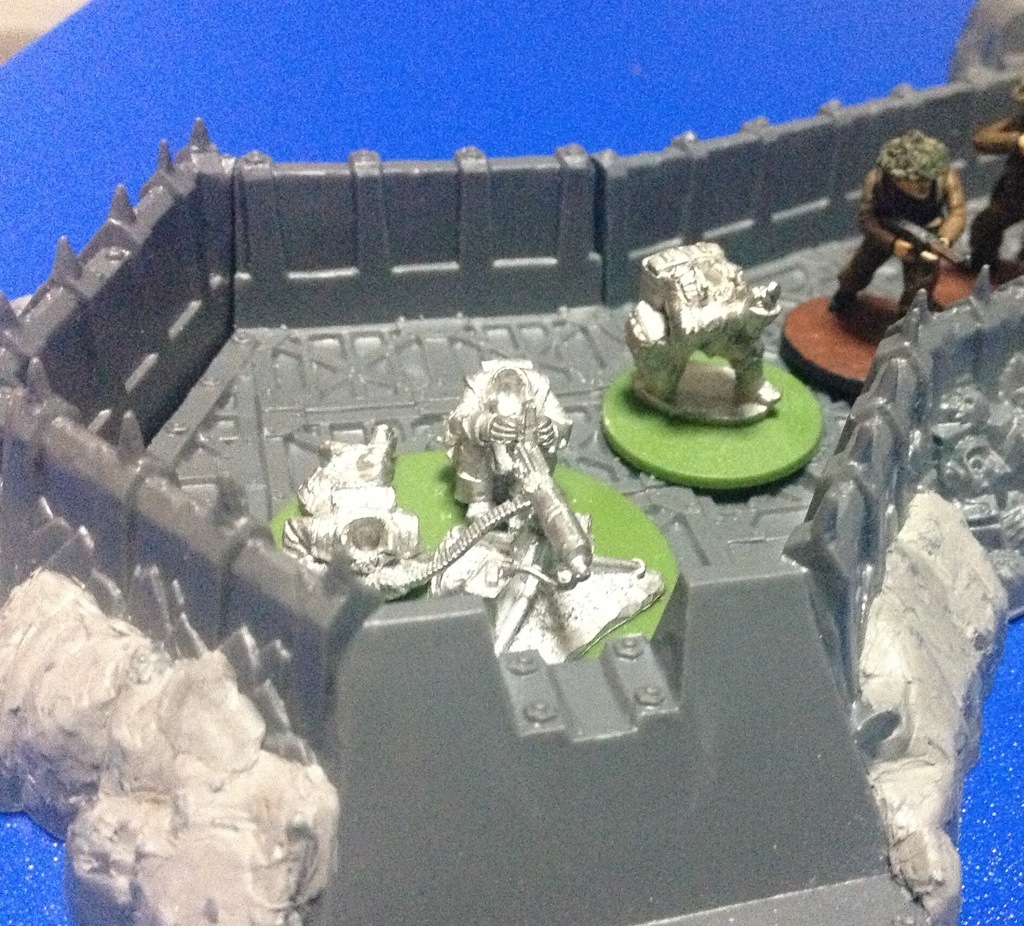 Close up on the MMG. This one is not without its own problems but generally was much nicer than the mortar to put together. The main one is that I’m trying to cram things into a 40mm base; the prone belt feeder doesn’t quite have enough room on the base. Had to cut a bit of the tripod base off to accomodate, and still have to tweak the ammo belt to fit into the receiver properly. Still have to base things properly before I can glue the ammo crew onto the base. And no, I have no idea what the third crew is holding.

One thing about these 40mm bases — I got them off Renedra, and they are actually a bit wider than GW’s “40mm” bases. I suspect GW is a bit smaller than actual 40mm but am too lazy to drag out a ruler to check. The main thing is that I can’t use the LOTR cavalry movement trays to transport as the base is just a bit wide and cannot be accomodated… so much or that idea.